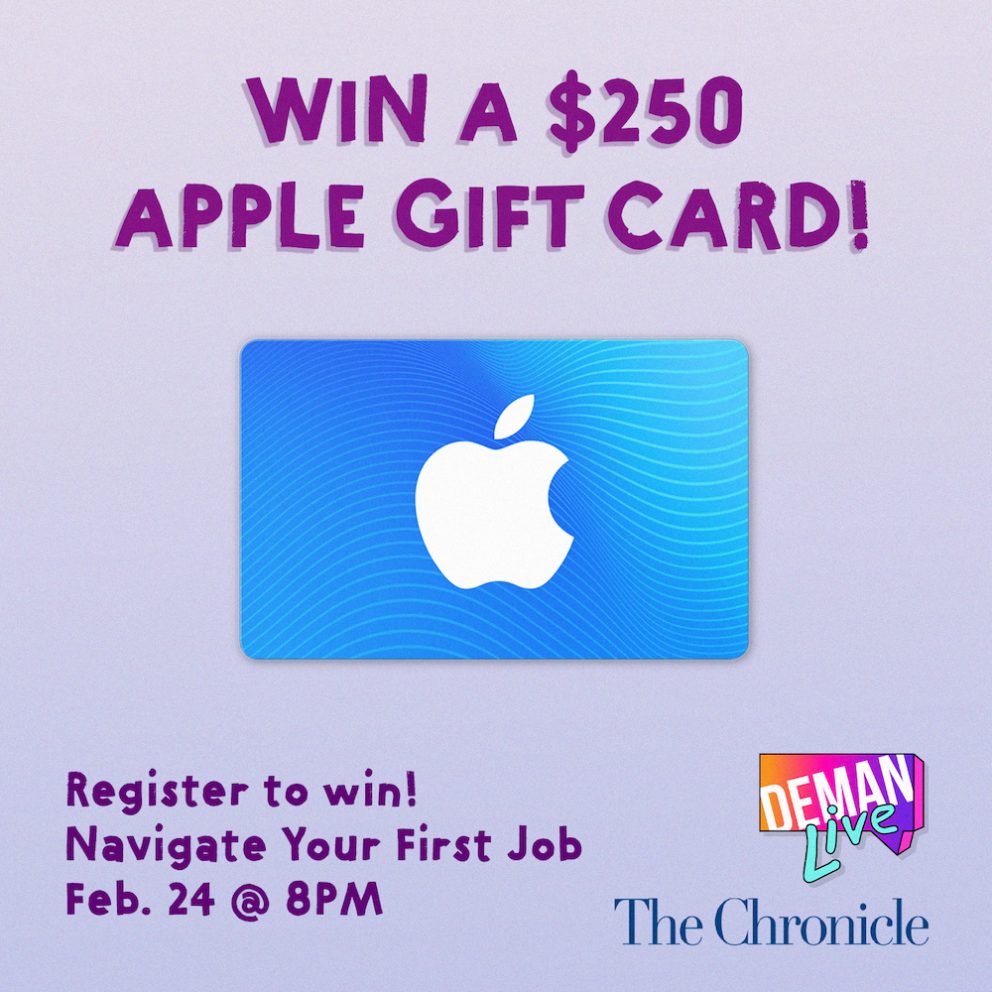 DEMAN is teaming up with The Chronicle to raffle off a $250 Apple gift card! Register for and attend our Navigate Your First Job Zoom for your chance to win. All Duke students are eligible!

Duke students! Are you looking for a job in creative industries after Duke? Hoping to secure an internship this summer? We’re here for you! Join DEMAN Live, Duke Career Center, and The Chronicle on February 24th for Navigate Your First Job in Creative Industries, a special virtual panel with an all-star lineup of recent Duke graduates.

Meet Dukies working across the country in creative careers, including film, digital media, tech, sports, and higher ed. They’ll share their career paths, helpful Duke experiences and offer advice for students and alumni looking to break into these industries, as well as answer your burning questions.

Thank you to our collaborators—find them on our Facebook event page!

Alexandra Bratton is a Partner Marketing coordinator within NBCUniversal’s Content Distribution department. Before embarking on her marketing career, Alexandra spent a year in NBCUniversal’s Page Program, securing rotations with TODAY Concourse, SYFY Digital, and Content Distribution, Partner Marketing. She also interned with The Senate Committee on Energy and Natural Resources, William Morris Endeavor, Temple Hill Productions, and the Bhutan Foundation before graduating from Duke in 2017. Outside of work, Alexandra enjoys hiking, fantasy books, and musical theater.

Bryce Cracknell is a passionate social impact producer and storyteller from Charlotte, NC. He has led social impact campaigns for narrative and documentary features and television shows including When They See Us, Just Mercy, and John Lewis: Good Trouble. As a storyteller, Bryce aspires to elevate narratives, histories, and experiences that are often overlooked, cast aside, or forgotten. He’s a Morris K. and Stuart L. Udall Scholar and graduate of Duke University where he earned a B.A. in Public Policy.

Growing up in a Cherokee and African American blended household, Chaz spent most of his youth in Nashville where he competed in Track and Field internationally as a Decathlete by day and wrote music while in a rock band by night. Traveling the world as an athlete, musician, and outdoorsman kept Chaz away from his home life, where his abusive father trafficked drugs for the Sinaloa Drug Cartel. Overwhelmed with stories to tell, Chaz turned to screenwriting as an escape, while completing his Bachelor’s degree at Duke University. Now, armed with a recently acquired M.F.A. from Loyola Marymount University, he’s found a love of weaving genres together around socially impactful narratives featuring flawed characters burdened by grief, duty, and passion.

Jesse was born and raised in Manhattan, NYC and grew up a die-hard New York sports fan. Though his original dream was to play shortstop for the New York Yankees, he quickly realized that such a fantasy would never be his reality and instead found a passion for a more behind-the-scenes role. While majoring in Public Policy at Duke University, Jesse spent much of his free time filming, editing and producing sports content for Duke Student Broadcasting—going on to intern at the NHL Network and National Basketball Association in consecutive summers. After graduating in 2016, Jesse spent the next two years as a member of the NBA’s Associate Program, rotating through four distinct departments at the League’s headquarters and gaining unique skill sets and experiences across the organization’s top business priorities. Ultimately, he earned a full-time role in the Global Partnerships department—where he remains today—specifically focused on the NBA’s business initiatives throughout Latin America.

Jorge Tajj Badil-Abish is just as much of an enigma as his name suggests. This industry calls him a copywriter. His friends call him for help writing their Instagram captions. His mom calls him her “silly rabbit.” You can call him Tajj.

Hailing originally from Texas, Tajj now resides in good ole foggy California (San Francisco) where he began his career at working on clients like Clorox, Hotwire and The Ad Council.

Currently, he’s at Goodby Silverstein & Partners where he binges ideas for Comcast/Xfinity, shoots headlines from deep for the Golden State Warriors, sips on scripts with the Boston Beer Company and occasionally stays up late thinking about Rockstar Energy.

Marielle graduated from Duke in 2018 with a B.S. in Economics and Certificate in Decision Sciences. While at Duke, Marielle served as the EVP of BOW, worked for the Social Entrepreneur Corps in Nicaragua through DukeEngage, and studied abroad in London at UCL. She is now based in Seattle working in Xbox Strategy for Microsoft, working to drive long term strategy for Xbox and Microsoft leadership, outline and pursue M&A opportunities and define the gaming market. Previously, she worked in the Cloud and Digital Stores divisions in a variety of marketing roles.

Marina is a video editor and multimedia artist based in San Francisco. After graduating from Duke she began freelancing as an Assistant Editor at various creative agencies and production companies in the Bay Area, including Apple, Avocados & Coconuts, FCB West, Cisco and Bonfire Labs. Her recent independent work includes producing the first two seasons of The Nocturnists podcast, associate producing and editing @theinternet (2019) and editing Blue 27 (2020). She is currently a Junior Editor at MasterClass.

Nina is a recent Duke English graduate from Raleigh, N.C. and this year’s Duke Arts Administration Fellow. As a Duke student, Nina was the editor of The Chronicle’s arts & culture section, Recess, and spent a semester in NYC with the Duke in New York program. Currently, she provides support for Duke Arts’ wide range of programs, including DEMAN, StudioDuke, and DukeCreate. In her free time, Nina enjoys taking photos, watching movies, and being stumped by the NYTimes crossword.

This workshop will meet online via Zoom. See link at top of page.