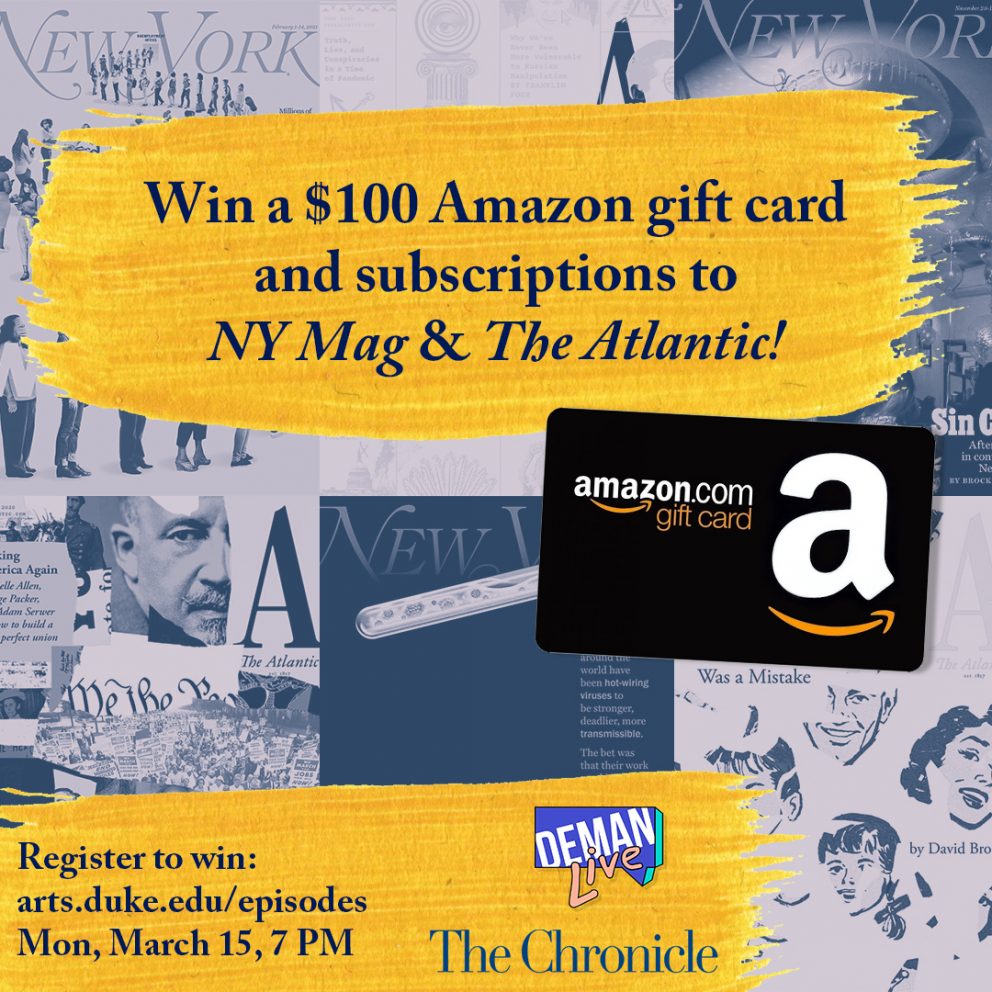 WIN A $100 AMAZON GIFT CARD & SUBSCRIPTIONS TO THE ATLANTIC AND NEW YORK MAGAZINE!

DEMAN is teaming up with The Chronicle to raffle off a $100 Amazon gift card and subscriptions to both The Atlantic and New York Magazine. Register for and attend our Tell Me More: Concept to Cover episode for your chance to win. All Duke students and alumni are eligible!

Robinson and Graham will take us behind the scenes of the creative process of magazine cover photography and cover stories for their respective publications, share how they are photographing and reporting globally during the pandemic, as well as answer your burning questions.

Maya Robinson is a senior photo editor at New York Magazine. She has been with New York for nine and a half years. Previously she held the roles of Art Director of Photo and Visuals and Photo Editor for Vulture.com, New York’s culture website where she developed the visual identity of the brand. She has also worked with Harper’s Bazaar and Teen Vogue. She graduated from Duke in 2011.

David A. Graham is a staff writer at The Atlantic, based in Durham, N.C.. He was previously politics editor of The Atlantic, where his section won a Webby Award. He has written and reported for Newsweek, The Daily Beast, The Wall Street Journal, Our State, and The National in Abu Dhabi. He graduated from Duke in 2009.

Sujal Manohar is a recent Duke alumna and Alice M. Baldwin Scholar who thrives at the intersection of the arts and sciences. Originally from Dallas, Texas, she enjoys using the arts to raise awareness about health issues and help people living with illness and disability. At Duke, Sujal served as the Photography Editor for the Chronicle’s 114th volume, taught art to pediatric patients, and created artwork about mental health for her senior thesis. Her documentary photographs highlighting the Nasher Reflections Program, which offers art gallery tours for adults with dementia, were displayed at Duke’s Art of Science Gallery.

Sujal is currently serving as a Hart Fellow and AmeriCorps Artist in Residence at Imagine Art, a nonprofit art studio for people with disabilities in Austin, Texas.

This workshop will meet online via Zoom.