Vice Provost for the Arts

As Vice Provost for the Arts, Brown leads the overall direction of the arts across Duke, oversees Duke Performances and the Rubenstein Arts Center, serves as the university liaison for the Center for Documentary Studies and the American Dance Festival, and works collaboratively to deepen the integration of the arts into the educational experience and extend the impact of the arts at Duke to Durham, the region, and beyond. The Vice Provost for the Arts also leads the Council for the Arts, an advisory board that draws from a wide range of departments and entities at Duke with a stake in the arts. 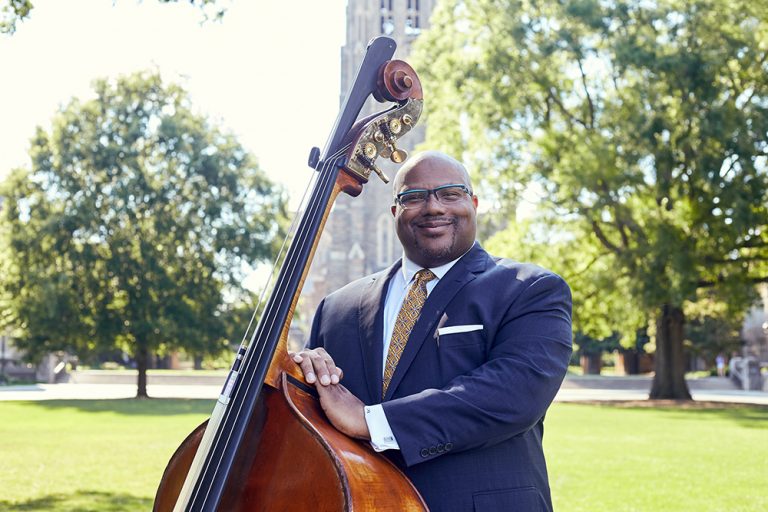 Advancing the Arts at Duke

“We are a nation in crisis because of the coronavirus, racism, and deep political division,” says Brown. “I am honored by this appointment, and I recognize we are in dire need of hope and healing. Arts and artists are essential, now and always. The ways we find ourselves divided tend to vanish when we share experiences in the arts. One of my main missions will be to enable our artists and arts organizations to unite us as human beings, to strengthen our shared community, and to demonstrate our collective resilience, despite the pandemic and this division.”

John V. Brown, Jr., J.D.
Vice Provost for the Arts
Director of the Jazz Program
Professor of the Practice of Music

When he was very young, John took piano lessons from Frances Hunter (a close family friend), and began studying the bass when he was just 9 years old with his beloved teacher, Susan Ellington. He has been performing ever since. John began performing with the Fayetteville Symphony Orchestra (NC) at age 13, and he was playing Principal Bass with that orchestra and performing with the Florence Symphony (SC) while still in high school. As a student in Fayetteville, John had several mentors (including Paul Scott, Walter McPherson, Richard H. L. Jones, Hennigan “Buddy” Kearns, Betsy Heath, Felix Sawyer, Jay Bolder, Alan Pierce, Janice James, Joy Cogswell, Alan Porter, Craig Brown, John Cubbage, the late Malachi Sharpe, Tom Gavin, Harlan Duenow and Ernest Plummer) who helped guide his interests and keep him focused on studying music.

As a student at UNC-Greensboro, he studied bass with Jack Budrow, performed with the Greensboro, Winston-Salem and Roanoke (VA) Symphony Orchestras, and while still an undergraduate, he began performing regularly with the North Carolina Symphony. In college, John also developed a great love for jazz, and began pursuing performance opportunities in both jazz and classical music. In college, he teamed with fellow student Thomas Taylor to form the jazz quartet, “In the Black,” and the group enjoy a successful career performing in the region.

Brown joined Duke University’s music department as an adjunct instructor in 2001, becoming assistant professor of the practice of music and director of the Duke Jazz Program in 2003. That same year he founded Jazz @ the Mary Lou Williams Center for Black Culture, a weekly live jazz jam session open to campus and community, now driven by student leadership in the Duke University Union. John Brown began his tenure as Duke’s first full-time Vice Provost for the Arts on July 1, 2020.

Interview with the INDY Week

The INDY Week's Dan Ruccia, a former student of John Brown's, interviewed the incoming Vice Provost for the Arts for the July 1 issue: "I am committed to making arts accessible on every possible level, starting at home, looking at our student experience and enhancing those opportunities, inspiring people to collaborate, giving people license and motivation to use arts as the foundation for connection," says Brown.