William Paul Thomas is an artist based in Durham. He taught at Duke in 2017-2018 as the Brock Family Visiting Instructor in Studio Arts, was in residence at the Ruby in 2019, and frequently leads workshops with the Nasher Museum of Art and DukeCreate. In this profile, junior Dani Yan digs deeper into the "magnetic" portraits in Thomas's Cyanosis series.

Cyanosis is the medical term for blue skin. When blood lacks oxygen, it darkens and reflects more blue light, causing discoloration throughout the body.

In 2015, William Paul Thomas did not know about this condition when he decided to paint half of his nephew’s face blue in a portrait. He initially wanted the blue to bring out the warm brown shade of his nephew’s complexion, but a longer look at the canvas led Thomas to consider the “lifelessness” and “emotional impact” of the blue-grey hue. He later learned about cyanosis while researching anatomical causes for blue skin, and adopted the name for his ongoing series of portraits. His Cyanosis series now includes over thirty paintings of Black men with blue-casted skin. Thomas said that he will add to the series for the rest of his life.

He starts the portraits with a layer of acrylic paint, which is easier for oil paint to adhere to than plain canvas. After the base coat is applied, he flips the canvas upside down. Inverting the composition helps him separate his subject’s facial features from his preconceived ideas of what they look like, and instead consider them as abstracted geometric elements. Thomas holds his phone—which displays a picture of his subject—in his left hand and a paintbrush in his right. His gaze constantly shifting, he never dwells on a line or slows down to measure. His paintbrush dances, but his expression remains stoic. Still, there is joy in his process. In the mixing of bubblegum pink with porcelain white and cherrywood brown. In the delicate staccato of his paintbrush on his palette before he brings it up to the canvas.

Thomas’s art has always been tied to the people around him. In grade school, he scrawled cartoon drawings into every corner of the 8×10 inch Crayola sketchbook his mother gave him. When he saw a mural under a muslin covering on his grandmother’s walls—originally drawn by his uncle—he traced its outline. His grandmother scolded him for drawing on her walls, but encouraged him to practice the arts through her community outreach organization.

“My work reflects the people I encounter,” Thomas told me. “I’ve learned so much from every person that I’ve talked to. It just made sense to make pictures of people, because that’s the way I learn about and appreciate the world around me.”

“It just made sense to make pictures of people, because that’s the way I learn about and appreciate the world around me.”

Thomas began addressing race in his work while studying at the University of Wisconsin-Whitewater, where he was one of the only Black students in the BFA program. He felt an urgency to engage with racial justice, but wanted to avoid painting common motifs like slave ships or nooses. Instead, he turned his lens toward the Black people in his life.

Thomas paints people he is curious about. Some of them are his relatives or friends, others caught his eye at a bus stop or at his place of work. Whomever they are, Thomas is most concerned with honoring his subjects. He focuses on faces, de-emphasizing bodies.

“It started off as a consideration of how much emphasis we put on the human body, especially for Black people. Or how much our identities are attached to our bodies in the public imagination,” Thomas said. “I wanted to remove the stereotypes and myths of the Black physique.”

Isolated from their bodies, Thomas’s subjects take on the form of busts. Through his portraits, these Black men are granted the same status as white gods and emperors from ancient times. But instead of laurel wreaths and wavy curls, they sport cross earrings and dreadlocks.

“He has a master’s touch with the paintbrush,” said Seneca Modest, a filmmaker and friend of Thomas’s. “He captures the small details that highlight the beauty of Black culture.”

Thomas cares about how his subjects respond to his work. When asked about his proudest moment, he told a story about one of his subjects, Ryan, seeing his portrait displayed in Atlanta. Ryan had never been to a museum or gallery before taking his mother to see the portrait. Thomas said that Ryan seemed lukewarm about the portrait after seeing pictures of the finished project, but changed his mind after seeing it in person. Jiggy Riko, a Duke alumnus whom Thomas painted in 2019, had a different reaction.

“People said the painting looked more like me than I did,” he said. “My mom cried when she saw it for the first time. More than anything else, I felt seen. Like my presence and existence held meaning, value, and purpose.”

The Cyanosis portraits compel a response. Many of the subjects confront viewers with a direct gaze. The blue distortions also force observers to acknowledge and consider skin color.

“I think the quiet power of these paintings evokes a lot of contemplation and emotional response on the part of the viewer,” said Ashlynn Browning, who recently curated a show at the North Carolina Museum of Art that included Thomas’s paintings. “Will’s work has a dignity and poise to it that is very magnetic. You can’t look away from these paintings.”

Thomas uses cyanosis as a metaphor for the deprivations that Black men face as a result of racism. But the condition is also a literal evocation of the horrors of the Black American experience. In May, Minneapolis police officer Derek Chauvin murdered George Floyd by cutting off his oxygen supply. Less than a year earlier, Aurora police killed Elijah McClain in the same way. In 2014, it was Eric Garner at the hands of the NYPD. According to The New York Times, more than 35 Black people over the past decade have died in police custody after saying “I can’t breathe.”

The people in Thomas’s paintings are not victims of police brutality. His portraits are not commemorations, but celebrations of their subjects’ lives. And yet, their blood lacks oxygen, their skin turns blue.

Thomas is showing us that Black life, however sacred, is always vulnerable: a Black man in America can never breathe easy.

Dani Yan is a junior at Duke University, where he is a content creator for Duke CASTs, co-editor in chief of FORM Magazine, and a double major in Public Policy and Art History. He originally wrote this piece for “Magazine Journalism,” taught by Bronwen Dickey. 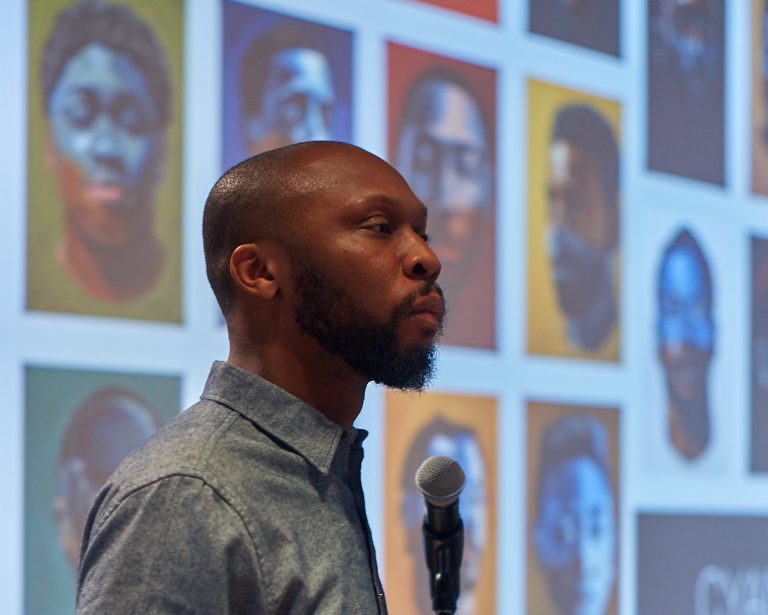 learn more about the artist

The Power of Representation

William Paul Thomas, who was an artist-in-residence in the Ruby last year, paints moving portraits that honor the people in his life and forefront race and identity. Two African American students at Duke share how his work resonated with them—and left a lasting impact.