Neglected Gem of Musical Theater Shines in the Ruby

Last fall, Duke’s Department of Theater Studies presented a workshop performance of Love Life, a rarely-staged 1948 musical with music by Kurt Weill and lyrics and book by Alan Jay Lerner. The production was the culmination of Professor Bradley Rogers’ Musical Theater Workshop class. It was directed by visiting artist Victoria Clark, a Tony Award-winning Broadway star, with assistance from guest choreographer Sara Brians.

According to the biographer for the Kurt Weill Foundation, the show’s creators “used American musical idioms and a vaudeville frame to chronicle in non-linear form the impact of 150 years of ‘progress’ on the marriage and family of Sam and Susan Cooper, who never age. Now considered the first ‘concept musical,’ its first genuine successor was Cabaret (1965).”

In spite of being a groundbreaking work by two giants of American musical theater, Love Life has had only a handful of performances since its first run. The main reason is that there was a musicians’ strike at the time and no original cast recording was made. A cast recording has a vastly larger reach than a run on Broadway, and it allows people to listen over and over and get hooked on a show. It’s essential to building a show’s legacy, as Professor Rogers explains in his his program note for the production:

The timing of this strike relegated Love Life to a curiosity, beloved by historians, connoisseurs, and those—like Harold Prince director of Cabaret and Company—lucky enough to have seen its original run. Because of both its obscurity and its inherent difficulty, the show is almost never produced and has never attained the attention it deserves. This production is our attempt to breathe life into this extraordinary piece of musical theater history.

The production featured a cast full of Duke students who are wonderful actors, dancers, and singers. Rebekah Wellons (Trinity ’19) took on the lead role of Susan Cooper with the same skill and intensity as the professionals who played the rest of her family. Her reflections follow.—Robert Zimmerman

Last fall, I had the incredible privilege of playing Susan Cooper in our workshop production of Love Life. As a Musical Theater minor, I’ve learned a lot about musicals and even participated in a professional workshop production (Duncan Sheik’s The Aeneid in Spring 2017). But this experience was without a doubt the pinnacle of my time here. I left every rehearsal knowing something new. From vocal technique to acting choices to the industry itself, we covered it all.

The Coopers Through the Ages

When the show opens, it’s 1791 and the residents of a small New England town are surprised to find a new carpentry shop in their midst. Samuel Cooper—the carpenter—introduces himself, his wife, Susan, and his children, Johnny and Elizabeth. From this idyllic beginning, the play checks in every 30 years or so. Samuel sets carpentry aside to work in a factory, then leaves the factory to go to the railroad. At the end of the first act, it’s the roaring 20s and he’s a businessman.

Meanwhile, Susan is left more and more on her own to manage the home and raise the children. She finds fulfillment as a suffragette and then enters the labor pool herself. During the second act, set in 1948, both parents have office jobs and the family falls apart.

Vaudeville numbers between acts provide commentary and comic relief. For instance, as capitalism takes hold in the first act, the Vaudeville chorus sings “Economics,” laying out a series of relationships complicated by fiscal progress.

Working with the professional team was without a doubt the highlight of this experience. This show has been a passion project of Clark’s for a while now, and the enthusiasm and experience that she brought to our class was inspiring. From her first day leading audition workshops, Clark captured our attention, respect, and love, pushing us all to be more thoughtful and diligent in our work. And it was fascinating to watch her problem-solve, restructuring the musical in front of our eyes so that it felt contemporary and relatable.

Clark’s work was supported and amplified by guest choreographer Sara Brians. She put a great deal of energy into training four student dance captains, who then taught the choreography to the rest of the cast. The experience level of our cast ranged from neophyte to aspiring professional, but that never fazed either Clark or Brians. They had a way of making each of us feel like we were ready for anything.

As much as our class learned from Clark, we also learned from the professional actors working alongside us. Samuel Cooper was played by Daniel Schwait, an actor and singer based in New York handpicked by Clark based on past work together. The other two professionals, ironically, were the two amazing 12-year-olds who played our kids: Huck Borden and Isabella Grace Houston. The focus and craft of all three did so much to animate this work and reinforce the standards that the production team required of all of us.

This was the kind of work I’ve always dreamt of doing and I got the once-in-a-lifetime experience of trying it out amidst the stability and security of a university setting.

When I chose Duke almost four years ago, I never imagined an opportunity like this would come my way. This was the kind of work I’ve always dreamt of doing and I got the once-in-a-lifetime experience of trying it out amidst the stability and security of a university setting. I got to dig deeply into an important piece of theater and learn from the best in the industry. I am so grateful.

Love Life was produced by Duke Theater Studies with support from the office of the Vice Provost for the Arts – Duke Arts and by special arrangement with the Kurt Weill Foundation for Music, Inc., and the Alan Jay Lerner Testamentary Trust. 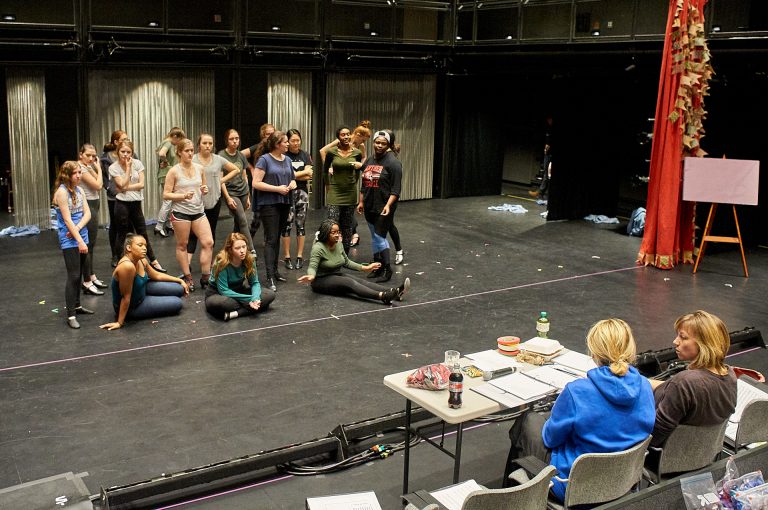