In her month-long residency at Duke in the Rubenstein Arts Center, puppeteer Marina Tsaplina created and performed a deeply researched piece of theater exploring human imperfection and the life-denying eugenics impulse.

This past March, puppeteer and performing artist Marina Tsaplina arrived at Duke with a few drawings, including a clown sniffing a flower and a pierced puppet with strings coming out. A month later, clown, flower, and puppet were realized on stage in her performance of Illness Revelations and the Bodies of History+Medicine+Us—a life-affirming confrontation with death. In between concept and performance was a whirlwind of workshops, construction, and rehearsal.

Tsaplina started college as a student of film animation but after a few years she was drawn into a puppetry—a different kind of animation, in which the performer brings a puppet to life. A fellowship allowed her to study puppetry in Berlin, and her time there politicized her.

“I returned to New York at the same time Occupy Wall Street was happening,” Tsaplina says, “and became involved with the anti-fracking movement in New York, doing agitprop theater stuff.” Work in the area of environmental justice led to a “collision moment” that turned her focus to her inner ecology and the Type 1 diabetes she had lived with since the age of two.

“I made the connection that the world out there, the water out there, is not separate from my body. My emotional and physical life are not separate. It was a fire-starting realization.”

“Theater is the art of relationship. And I realized that I’m in a relationship with my illness, and that relationship is formed and taught. Who is teaching it? How is it being taught?” To find out, she turned her illness into a puppet.

The result was a not-for-profit, THE BETES™, which she created to help others manage their disease through puppetry and performance. In the process she learned about narrative medicine and the medical humanities. In 2016 she became a Kienle Scholar in the Medical Humanities at Penn State, where she met and bonded with Jules Odendahl-James, dramaturge in Duke’s Department of Theater Studies. The connection led to an invitation to Duke in the fall of 2017 for the Health, Humanities, and Social Justice Conference.

Her first visit to Duke brought Tsaplina in contact with Ray Barfield, a pediatric oncologist with a philosophical bent who happened to be on the lookout for a puppeteer. Inspired and informed by his work caring for patients and teaching future practitioners in Duke’s medical complex, Barfield is on a quest to re-humanize the practice of medicine. He had recently become enchanted by puppetry for the profound engagement it offers not only with creative imagination and storytelling but with embodiment itself. In Tsaplina he found the artist collaborator he needed to launch an undergraduate fellowship program called Reimagining Medicine. The summer after that first visit to Duke, Tsaplina was back, teamed up with Odendahl-James and her Theater Studies colleague Torry Bend to lead a group of pre-health undergraduates through intensive exercises in puppetry.

Tsaplina’s new project, Illness Revelations, extends the work of Reimagining Medicine both into performance and into the broader community of what she calls the Chronic Commons. The latter aspect was developed during the workshops and performances she led during her residency in the Rubenstein Arts Center. In most of those meetings, she passed out feathers made of fabric glued to a thin wire and asked attendees to grasp the end of the wire and hold the feather still. It is impossible—the point of the exercise. We vibrate because we are alive, and as long as we live, we vibrate. You can look at the tremble as an unfortunate imperfection to be suppressed (which Tsaplina identifies as the essence of the “eugenics impulse”) or embrace it as sign that you’re alive. That choice is at the heart of her show. 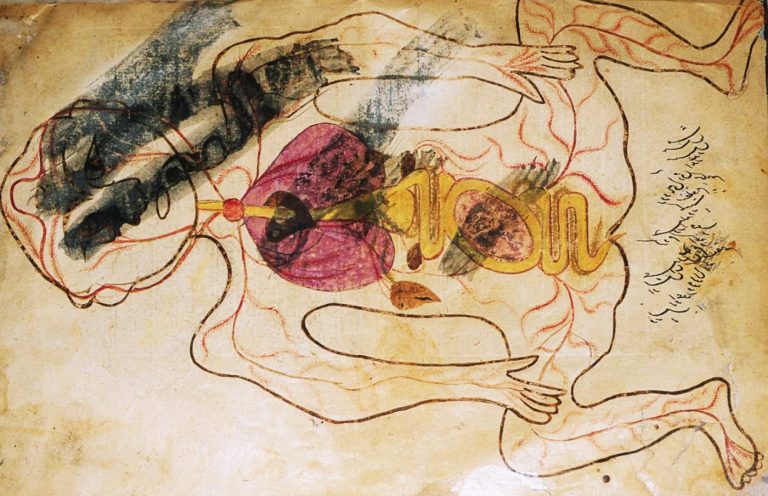 Marina Tsaplina in the Ruby

Illness Revelations: The Bodies of History+Medicine+Us breaks new ground in the growing field of the medical and health humanities by centering socially-engaged arts practice.

Tsaplina used every possible moment of her time at Duke to develop her show—physically building her puppets and other props, and also creating the characters and action through a collaborative process. It was not work she could do alone.

“I can’t see myself from the outside,” Tsaplina explains. “I am only on the inside. So it is critical to have outside eyes.” Her main interlocutor was Odendahl-James, who acted as dramaturge in the early stage of development and returned in the final days as a kind of director, polishing the show with a careful, critical eye for continuity and detail.

A public preview at the Wellness Center midway through the residency was Tsaplina’s first opportunity to really test her concept. She had only about ten minutes of material, but it introduced the dynamic of two starkly contrasting characters, known as “Apron” and “Nose,” at the heart of the show. First Tsaplina came out wearing an apron, as Apron. She fussed with a large flower while delivering a mini-lecture on eugenics, with lines like “the most unequal thing in the world is the equal treatment of unequals,” and “good social practice is the control and the elimination of weakness, dependency, and suffering.”

Tsaplina left the stage and returned as a clown with a red nose. Nose is a free spirit who delights in the world as it presents itself. With a spool of stiff wire and some Post-it Notes, he clownishly makes his own flower. In her later presentation of the show, Clown finds Apron’s flower and it leads him to a terrifying discovery.

Based on the preview, Tsaplina knew the show had legs. Her next step was to spend a couple of afternoons working intensively with Evan Mitchell, a local actor, director, and teacher who often collaborates with Torry Bend.

A few days later, Tsaplina ran through her best approximation of the show for her longtime friend and collaborator Deborah Kaufmann, who observed over Skype. While her work with Mitchell focussed on developing each character, with Kaufmann she focussed on continuity and coherence.

“Deborah was immediately able to see that the growth of the wire flower needed work. She told me I was treating it as a wire, she couldn’t tell it was a flower. That was immensely helpful. And she reminded me that I need to do the performer work of knowing, every single moment, where I am and what’s driving the next moment.”

The culmination of Tsaplina’s residency was a performance in the von der Heyden Studio Theater. Illness Revelations is a piece that defines its own terms, a play of action and emotion with a few suggestive props but no dialog or narrative—Nose is non-verbal and Apron merely lectures. Music plays an important role, leading Nose to his moment of revelation and underscoring its consequences. (I had the great pleasure of being the principal musical collaborator and bandleader.)

Though much fleshed out from the preview, it was still a work in progress. Just as she had done at the preview and in her workshops, she gave the audience a writing prompt after the performance—to write an ode to their imperfection—and then opened the floor for feedback.

The work is a tribute to Tsaplina’s deep commitment art-making as an intensive, layered research process.

It involves historical research in a conventional sense. It involves documentary research, collecting the experiences of people—both providers and patients—with health and healthcare. And it involves imaginative research into the truth of a character—the kind of work she did with Mitchell and Kaufmann. This is the most distinctively artistic research component, but no less rigorous and intensive.

Tsaplina will return to Duke during the summer to guide the second Reimagining Medicine contingent through their own artistic research. She will also continue developing her pedagogy for healthcare providers, “Embodiment and Puppetry.”

Tsaplina’s residency at Duke and in the Ruby began in the Duke library archives, searching for imagery related to eugenics and alchemy—ingredients for a collaboration with Duke MFA EDA student Lauren Henschel. There was a preview performance midway, and then a final performance in the von der Heyden studio theater on the first evening of Disability in the Disciplines. The conference was organized by Duke’s Health Humanities Lab, which also sponsored Tsaplina’s residence, with help from The Office of the Vice Provost for the Arts—Duke Arts and the Department of Theater Studies.

Seven workshops held during the residency reached undergraduates, graduate students, health professions, and the broader community. The classes she met with were Visual Cultures of Medicine, Global Health – Qualitative Research Methods, and Puppetry.